Brazil passed a grim milestone this week, reporting 4,000 Covid-related deaths in a single 24-hour period for the first time.

Despite lingering chaos in overcrowded hospitals and a collapsed health system in several parts of the country, many governors, mayors and judges are reopening parts of the economy.

“This is probably the most dangerous place in the world right now,” Dr Miguel Nicolelis, a neuroscientist at Duke University, said last month.

“It is the worst tragedy in Brazilian history, by a long shot.”

The latest stats from Brazil are horrifying – and only getting worse. They are driven by a more infectious strain of the virus that likely originated in the country.

On Tuesday, Brazil’s health ministry reported 4,195 Covid-19 deaths in the past 24 hours, well above the country’s prior single-day record of 3,869 set on March 31.

Brazil has set daily death records every week since late February, and the country’s overall death toll now trails only the US outbreak. Nearly 337,000 have been killed, according to health ministry data, compared with more than 555,000 in the United States.

As soon as next week, Brazil may break the record US seven-day average for Covid-19 deaths, according to a model by the influential Institute for Health Metrics and Evaluation (IHME) at the University of Washington.

The US average for daily deaths peaked at 3,285 in January. The Brazil 7-day average is currently 2,757.

“It’s a nuclear reactor that has set off a chain reaction and is out of control. It’s a biological Fukushima,” Miguel Nicolelis, a Brazilian doctor and professor at Duke University, told Reuters. 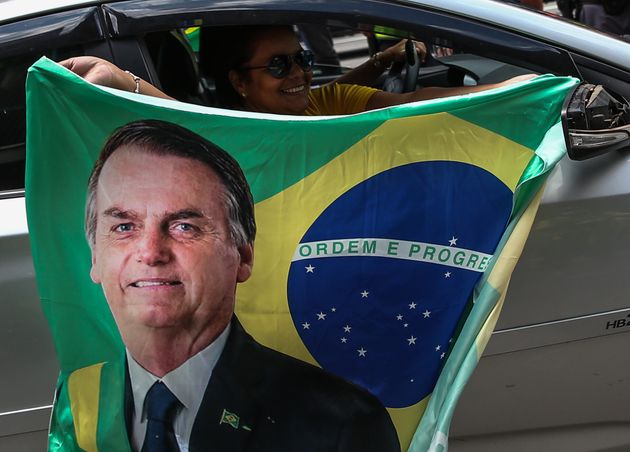 Bolsonaro has spent the pandemic playing down not only the risks of Covid, which he dismissed early on as a “little flu” and a media conspiracy, but also the huge death toll that has happened on his watch.

He has pushed back against mask-wearing, lockdowns and any other measure designed to limit the effects of the pandemic and has only recently and reluctantly began to tout the benefits of vaccines.

It even took an order from a Brazilian judge to make the 66-year-old wear a mask in public and he has often ventured into crowds to shake hands with his supporters.

So he’s taking it seriously now?

No. Bolsonaro and his government continue to rally against lockdowns and are insisting that, despite the rising death toll, the country can soon return to something resembling business as usual.

Economy minister Paulo Guedes said during an online event on Tuesday: “We think that probably two, three months from now Brazil could be back to business.

“Of course, probably economic activity will take a drop but it will be much, much less than the drop we suffered last year […] and much, much shorter.”

What about all the victims?

Judging from his public statements, he couldn’t give two hoots. In June he said: “We are sorry for all the dead, but that’s everyone’s destiny.”

And just last month he told Brazilians to stop “whining” and move on. “Enough fussing and whining. How much longer will the crying go on?” Bolsonaro told a crowd at a public event.

“How much longer will you stay at home and close everything? No one can stand it anymore. We regret the deaths, again, but we need a solution.”

So what’s his solution?

It appears to be to ignore the pandemic, carry on as normal and worry about upcoming elections instead.

“Very soon we will resume our normal lives,” he assured Brazilians during a televised address to the nation on Tuesday evening.

“We are tireless in our fight against coronavirus – this is our mission and we will fulfil it.”

The truth is exactly the opposite, reports HuffPost’s Travis Waldron. Early predictions that Bolsonaro would oversee the worst Covid-19 outbreak in the world now seem grimly prescient.

At its current rate Brazil could reach 500,000 deaths by the end of July and pass the United States as the global leader in total deaths by the beginning of 2022. 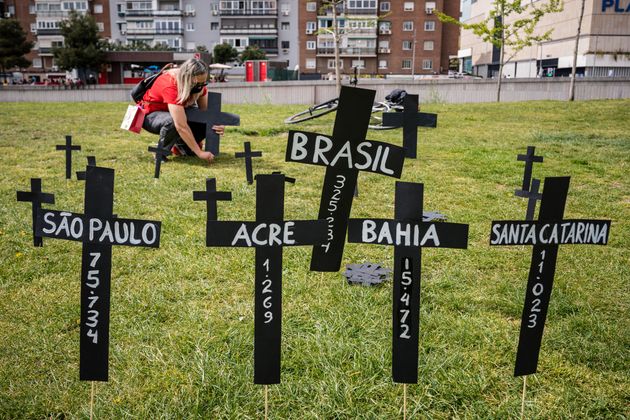 Instead of concentrating on the pandemic, Bolsonaro has been preoccupied with shaking up his government.

His handling of the pandemic has seen his popularity slide and he is up against leftist former president Luiz Inácio Lula da Silva in the 2022 presidential election.

In a shock move, the leaders of all three branches of Brazil’s armed forces jointly resigned last week following Bolsonaro’s replacement of the defence minister, a move that fuelled widespread apprehension of a military shake-up to serve the president’s political interests.

The defence ministry reported the resignations in a statement without any reasons being given for them.

Replacements were not named, but analysts expressed fears the president, increasingly under pressure, was moving to assert greater control over the military.

“Since 1985 [when military rule ended], we haven’t had news of such clear intervention of the president with regard to the armed forces,” said Carlos Melo, a political science professor at Insper University in Sao Paulo.

What does this mean for the rest of the world?

The key tool in the global fight against the pandemic is the increasing number of vaccines. The biggest threats to their effectiveness are mutant strains of Covid that could render them less effective.

Viruses are live organisms and as such have the main principal drive that we humans do – to survive.

Variations occur all the time. The ones that thrive are those that are more infectious and less deadly, because they survive in the bodies of more and more people.

One of the major factors in how likely a new strain will develop is much virus is circulating in a population so in a country like Brazil where cases are soaring, this becomes increasingly likely.

As already noted, a particularly virulent strain of Covid has already come out of Brazil, prompting concern around the world including in the UK.

So until Brazil – and all other countries with increasing infection rates – gets a grip on the pandemic, their national outbreaks could quickly become international crises.

We use cookies on our website to give you the most relevant experience by remembering your preferences and repeat visits. By clicking “Accept”, you consent to the use of ALL the cookies.
Cookie settingsACCEPT
Manage consent

This website uses cookies to improve your experience while you navigate through the website. Out of these, the cookies that are categorized as necessary are stored on your browser as they are essential for the working of basic functionalities of the website. We also use third-party cookies that help us analyze and understand how you use this website. These cookies will be stored in your browser only with your consent. You also have the option to opt-out of these cookies. But opting out of some of these cookies may affect your browsing experience.
Necessary Always Enabled

Any cookies that may not be particularly necessary for the website to function and is used specifically to collect user personal data via analytics, ads, other embedded contents are termed as non-necessary cookies. It is mandatory to procure user consent prior to running these cookies on your website.